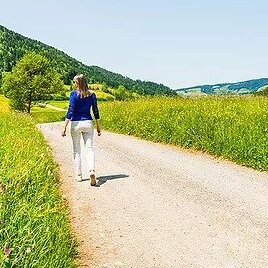 Extensive osteoarthritis in her right knee and torn menisci had left Jane unable to enjoy a walk on the beach and in severe pain.

Two years ago, Jane tore both menisci in her right knee. At the time An MRI scan revealed extensive osteoarthritis and she had an arthroscopy, but her knee never really recovered.

Over the next two years, the weakness in Jane’s right knee took its toll on her left knee, so much so that on holiday early in 2019, she was unable to walk along the beach without severe pain in both knees. Standing up after sitting for a while either at a desk or restaurant table resulted in excruciating pain. Jane had to wait for both knees to “settle” before she could walk forward.

Jane’s quality of life was becoming severely affected and even walking around a supermarket resulted in severe pain in both knees. She wanted her quality of life back, to be pain free and to be able to enjoy things that she had done prior to the menisci tears. In order to be able to do this Jane knew she would need to seek further treatment.

Jane worked at St Peter’s Hospital in Chertsey and had heard of Mr Trikha. When she researched knee specialists online when looking for a Consultant to treat her knees, he came up as one of the top knee specialists in Surrey and Jane asked her GP to refer her to him.

Following an appointment and scans, Mr Trikha felt a total knee replacement was the most appropriate course of action for Jane, given the condition of her right knee.

Jane’s operation went ahead in late Spring 2019 and she made good progress immediately, as she explains: “I am only three weeks post-op and so it is quite hard to judge at the moment. However, when I saw Mr Trikha 2 and a half weeks post-op, he gauged my mobility as being at the six week post-op recovery. My recovery has been so good, so far, that I am already back driving the car and able to walk unaided by crutches for 1.4 km, pain free.”

Her advice for patients considering a knee replacement is: “Please do everything both your medical team, Consultant in particular, and your physiotherapists ask you to do, both pre and post procedure. You have to put in the ground work yourself in order to achieve the results. Yes, post-op it hurts, but ice is your best friend and you have to push yourself if you want to do things that you haven’t been able to do prior to surgery.”

Jane summarises her treatment with Mr Trikha: “Mr Trikha operated on me at the Nuffield Hospital Woking and the care that I received from everyone was exceptional. Mr Trikha, himself, took the time to explain all the pros and cons of major surgery and at the end of the day, because my life was so limited by mobility and pain, the decision to have a total knee replacement was mine. The reassurance that Paul gave me, his ability to take the time to explain everything and answer all my questions and concerns, helped me to make the decision, a decision I do not regret in anyway. Paul is charming, reassuring and patient, everything that one needs in a Surgeon and when contemplating major surgery. A Consultant at the top of his field and apparently my success so far is in his top 10%!! I am seeing him in a month’s time and then again in three months’ time, when we will decide when or if the left knee needs replacing as the damage (as shown on MRI) to that knee is as great as the right! I cannot recommend him too highly, he has a lively sense of humour to go with his professional approach, however on the day of surgery, he is in the “zone” of total professionalism and as a patient approaching a major procedure this in itself is reassuring – he’s in “business” mode, your limb and life are in safe hands!”

M Trikha concludes: “Jane has worked hard which is already paying off in terms of her recovery from her total knee replacement. I wish her well with her continued improvement.”