Skip to content
Young footballer Alex is back to winning form after a fragment is removed from his knee by Mr Paul TrikhaWill Piercey2021-01-30T14:29:05+00:00 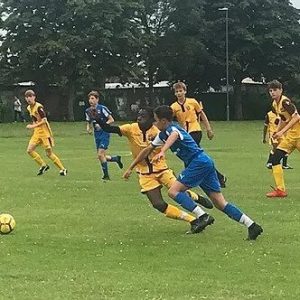 Alex, a keen footballer, had a clash while playing in February 2019, which resulted in him being in pain whenever he ran for more than a few minutes.

​His mum, Caroline, was keen to get him treated as soon as possible and asked for him to be referred to Mr Paul Trikha, who had treated Alex 5 years earlier.

​When Mr Trikha saw Alex, whilst the pain and swelling eased off following icing he was unable to fully flex his knee and his knee was tender.

​An X-ray soon established that Alex had knocked a large fragment, 15mm, off the lateral trochlea, a part of the knee that keeps the kneecap stable. In Alex’s case this had become stuck in the front of his knee and was restricting his range of movement.

As this fragment was causing Alex problems, after discussion between Mr Trikha, Alex and Caroline, it was decided that Mr Trikha would perform an arthroscopy, a straight forward, minimally invasive procedure, carried out as a day patient.

During the operation, Mr Trikha removed this large fragment from Alex’s knee and carried out a procedure called microfracture, which helps with the formation of new joint surface cartilage. Alex’s knee was put in a brace to protect his knee.

Alex then began a rehabilitation programme with physiotherapist Rob Marlow at Weybridge and Walton Physio, which Alex then supplemented with his own gym training a couple of times a week.

​After two months Alex had a full range of movement, could do a full squat, had minimal swelling and no pain. Around this time he was also able to return to football training.

In June 2019, Alex was able to participate in his school football tournament and his team won, much to his and his mum’s delight.

​She sums up Alex’s experience: “When we saw Mr Trikha, our hope was that Alex would be able to return to football pain free. I am pleased he has been able to return to football and all other sporting activities. Alex’s experience really could not have been better given the circumstances. He was able to have his operation within 2 weeks and begin the recovery process.”

​Her advice to other parents in a similar situation is: “I would suggest you get it reviewed as soon as possible so it can be dealt with sooner rather than later.”

​Mr Trikha concludes: “I am so pleased to see Alex back to full strength and back to all his sporting activities, especially football. Delighted to see his team won the football tournament Alex had been building up to during his rehab.”