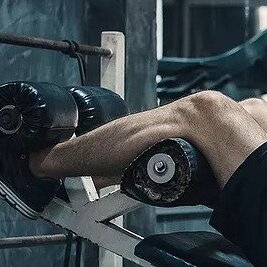 Restrictions in the range of movement in Asad’s right hip were causing him pain and limiting his range of motion.

Asad was experiencing a limited range of motion and pain in his right hip and had been diagnosed with CAM impingement or lesion, which is a deformity of the ball at the top of the femur (thigh bone), following an MRI scan, as well as early signs of arthritis. His condition had not really improved after a year of physiotherapy. This was restricting Asad to limited workouts in the gym and eventually it was even painful to run and sit for long periods of time, as the impingement in his hip would get aggravated so easily.

Asad knew he needed to seek further treatment and his physiotherapist and private healthcare insurer recommended Mr Dean Michael at Surrey Orthopaedic Clinic. Asad wanted to be able to return to running and weight lifting without pain and have a full range of motion in his hip.

On examination and on reviewing his previous MRI scan, Mr Michael wanted to repeat the scan to determine whether Asad had a significant labral tear (an injury to the soft tissue that covers the hip socket), or chondral lesion (cartilage damage) as well as a CAM lesion.

Following a review of the second scan, Mr Michael recommended a hip arthroscopy, which involves a small incisions through which a small camera, called an arthroscope, is inserted to view inside the hip. During the arthroscopy, he repaired damage to Asad’s cartilage, and removed the large CAM lesion, so that Asad would regain the wider range of movement in his hip.

Two weeks following this minimally invasive operation, Asad’s wounds were healing well and he started physiotherapy, working on gentle range of movement exercises in the first instance. He built up these exercises with a physiotherapist to include strengthening and stretching exercises for the next eight weeks.

Twelve weeks after his operation and at a follow up appointment, Asad was doing very well. He had not felt any pain for some time, had an improved range of movement and had returned to physical activity. At this point, Mr Michael suggested Asad could progress to normal activity.

Four months after his surgery Asad says: “I am only 4 months post-surgery, but already, range of motion has improved drastically and certain weightlifting positions feel so much more stable, I’m confident within a couple more months I will meet my end goals and expectations.”

He continues: “Simple things such as cycling feel so much smoother and improving. In set-up positions such as the dead lift and squats, they are improving weekly (full range has not been achieved but already feels a lot less uncomfortable/ painful).”

Asad’s advice for patients with similar problems: “If you have hip pain in exercises and notice imbalances and have performed a lot of mobility and corrective exercise and things have not cleared up, it’s definitely worth checking out. As long as the rehab is carried out correctly, things will improve massively after the surgery.”

He summarise his treatment: “Mr Michael was very professional in his approach and answered all queries regarding the procedure and took the time to explain the nature of the injury and procedure. The procedure itself was carried out swiftly and I was able to walk within a couple weeks. Few months down the line with the rehab things are already better than they were before the surgery, which was much quicker than I expected. All round pleasant experience, I just wished I’d checked up on the injury earlier and got the operation sooner!”

Mr Michael concludes: “Asad is a fit and active gentleman, and I am so glad this simple operation has helped him get back to the activities he enjoys so much.”