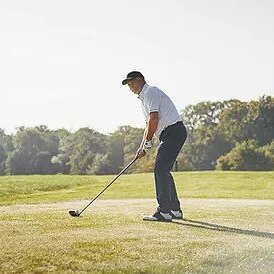 A keen golfer with a physically demanding occupation, Lee’s severe hip pain was affecting both his livelihood and ability to enjoy his leisure time.

Six years ago, aged 53, Lee started to experience pain in his hip area and lower back, which he put down to his years of playing rugby and football and latterly, golf and weight training.

​As a self-employed plasterer, Lee’s pain began to a massive impact on his life. His condition was getting progressively worse. He was living on painkillers and anti-inflammatory medication; sport was impossible; he couldn’t even play golf and working became very painful. His GP sent him for an X-ray and Lee was devastated to hear that he had a serious condition with “both hips bone on bone”. He was referred by his GP to see Mr Dean Michael at Surrey Orthopaedic Clinic.

​Lee was not optimistic about his treatment, but Mr Michael helped him take a positive approach and Lee had his first hip replacement (left hip) in January 2018 and his second (right hip) a year later. Initially Lee resisted having his right hip replaced, but Mr Michael’s prediction that it would need doing proved accurate and so Lee returned for that procedure. He is now pain-free and is hopeful of more improvement. He can walk, tackle the stairs, work and sleep with no discomfort.

It’s been a long, tough journey for Lee, but he says: “Thanks to Mr Michael and all his staff at the hospital and physio I’m getting my life back, and looking forward to the future, like running around the garden with my grandchildren pain-free. I can’t help thinking about the people years ago that were unable to have hip replacements. The pain they must’ve gone through. I consider myself very lucky.”

Mr Michael concludes: “Lee’s case is a great example of how often younger patients struggle on with ever worsening symptoms until they can no longer manage to work because of the fear of loss of income and that they are too young for hip replacement. Recent published papers suggest that hip replacement is not only extremely durable but are also surviving longer than we thought. 25 years is not unrealistic.”