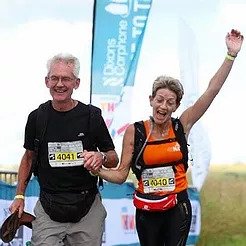 A committed and determined ultra walker, could Kathryn’s never-say-die attitude and Mr Dean Michael’s expertise return her to doing the things she loved?

Kathryn had suffered from joint pain since she was eight, which is when she first developed symptoms of Ankylosing Spondylitis (AS), an incurable autoimmune form of arthritis. Already a keen walker, from 2014 Kathryn fell in love with distance walking and despite her condition tackled several events, many with her husband John, such as the Thames Path 50km Challenge, the Race to the Stones 50km and the 100km Thames Path Challenge.

In January 2017, Kathryn started on anti-TNF therapy for the AS and it made a huge difference to pain levels. She joined her local parkrun, at first walking, then beginning to run again, (something she hadn’t done since her teens). The walking challenges came thick and fast through 2017 and 2018, including the 107km Isle of Wight challenge, the Saharan Challenge and the 80km Shropshire Way Challenge.

Kathryn’s left hip continued to be a problem throughout all these challenges and in 2018 her ankles and feet were also causing problems but improved dramatically thanks to Mr Michael’s referral to an excellent podiatrist.

​In August 2018 after using a jetwasher for a few hours, Kathryn was left with an awful backache and a searing pain in her groin and thigh when she tried to stand. She was admitted to hospital via A&E for an emergency MRI of her lower back, however, the MRI showed no trapped nerves and she was discharged, still unable to manage more than a couple of steps bent over. The pain was unremitting.

​Due to the long wait on the NHS, Kathryn decided to get private scans of her pelvis and hip from Mr Dean Michael (who ‘d seen her earlier in the year about her ankles and feet). Mr Michael explained that she had a labral tear (tear in cartilage on outer rim of hip) and that usual treatment would be a steroid injection in the hip but because Kathryn reacts badly to steroids, Mr Michael suggested using crutches for a few weeks in the hope that the pain would start to settle. Although she did manage to get a little more upright with the help of crutches, her thighs were weak and her knee unstable, so after a meeting with Mr Michael, a hip arthroscopy was agreed.

​Kathryn says: “I had no doubt that with his tremendous skill, good rehab and my huge stubbornness, I’d recover quickly and successfully and get back to the walking and running (and skiing) that I so love. My expectations have been more than met!” Before her operation, Mr Michael explained to Kathryn that he suspected that there might be a bit more going on than a labral tear so that recovery might take a little longer than he’d thought, and he was proved right as she also had a cam lesion which was addressed during the op.

​Mr Michael carefully explained the operation and what to expect afterwards and Kathryn was extremely happy with the way she was looked after. She says: “Mr Michael is so kind and caring, compassionate and empathetic as well as being a very skilled and knowledgeable surgeon.”

​She was home only a few hours post-op and the pain she’d been experiencing pre-op was completely gone. She started physio a week later, doing her exercises religiously and has gone from strength to strength, coming off crutches after two weeks. A month after her operation she began to walk her local park run again and at her follow-up meeting with Mr Michael, 11 weeks post-op, he agreed that she could make a gradual return to running.

​She says: “It’s going brilliantly – no pain while running or walking, excellent posture again and one incredibly happy patient!” If she overdoes things, she still gets a minor groin ache but that’s a good reminder to slow down and ease up a bit. She already has quite a few events lined up, including a skiing trip.

Mr Michael concludes: “I’m delighted Kathryn has made such a great return to the activities she loves. As with all patients, her commitment and dedication to her rehabilitation has been so important to ensure her recovery continues to go from strength to strength.”