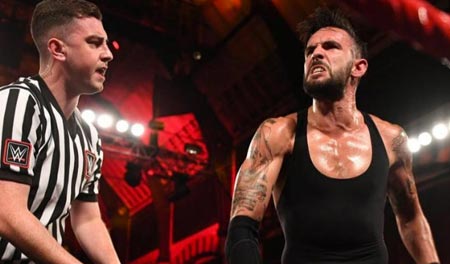 After suffering two separate injuries, Eddie was keen to return to his livelihood as soon as possible, comfortably and safely.

Eddie Dennis is a World Wrestling Entertainment (WWE) professional wrestler. In January 2018 he tore his right pectoralis major (a thick, fan-shaped muscle, situated in the chest ) in a wrestling match. He sought treatment with Mr Polyzois in March of 2018, who carried out a pectoralis major repair operation. After a successful rehabilitation, Eddie was able to return to wrestling within 5 months of surgery and eventually regained around 85/90% of his previous chest strength.

Then, whilst wrestling in March 2019, Eddie tore his left pectoralis major. Because he had been pleased with his first surgery and more specifically the level of communication and after care provided by Mr Polyzois, he chose to contact him again for the second operation. Following consultation and discussion, Eddie had a similar operation on his left side in April 2019.

Eddie hopes to be able to return to wrestling in October 2019 as he explains: “Through the rehab and return to competition from the first pec. tear I have more measured expectations for this second surgery. I understand that a return to previous chest strength is unlikely and I am simply hopeful to return to a level of strength and stability where I can wrestle comfortably and safely.”

He continues: “I am only 11 weeks post the second operation but am hopeful that again I will be able to return to wrestling within 5 months of surgery and will again regain reasonable chest strength. At present I am ahead of schedule in my rehabilitation.”

Eddie’s recommends to other patients with a similar injury: “I would advise anyone with a suspected pec. tear to get an MRI as soon as possible post injury. Following that I would advise seeking out an experienced surgeon to discuss operative and non-operative options. The mechanism of the injury affects the functionality post-surgery and all of these things need to be considered. Needless to say for any fellow professional athletes I would stress that in my experience surgery leads to excellent return to functional movement, stability and conditioning but does lead to a small, but noticeable drop in top end strength.”

Eddie summarises his care with Mr Polyzois: “I would recommend Mr Polyzois for upper limb surgery without hesitation. He had excellent communication pre and post operation and on both occasions was conscious of all considerations I had to make in understanding of my job, both functional and cosmetic.”

Mr Polyzois concludes: “As a professional competitor, it was essential we chose the treatment option which would allow Eddie to return to wrestling within a reasonable timeframe, with the necessary dedication to rehabilitation. I am delighted Eddie is making a good recovery from his second pectoralis major repair and wish him well with his planned return to professional wrestling in October.”